Produced by a steel knife and an intelligent artificial robot (AI).
Variable dimensions

The installation Calyx consists of suspended pieces of skin that have been manipulated and meticulously cut with a steel knife that is part of an artificially intelligent robot (AI) called Amygdala. This robot in the form of a pseudo-anthropomorphic limb is set up in an industrial computer server cabinet within the skins are placed.

Each piece of skin is initially made by hand by Donnarumma using a peculiar compound of organic materials, including his own body hair, in order for them to resemble human skin as far as possible. The robot’s only aim is to learn a ritual of purification known as “skin-cutting”. This animistic ritual is found amongst tribes in Papua New Guinea, Africa and Eastern Asia and consists of the cutting one’s skin in specific patterns. Through the experience of both pain and the body-altering wounds caused by the ritual, one achieves “purification”.

Amygdala is driven by adaptive neural networks based on repetitive logarithmic equations, which imitate the sensory motor system of animals. The robot´s movement is not preprogrammed. The neural networks receive sensory information from the robot’s body in real time, and the robot can adapt itself to any physical change or constraint in its environment. As a result, Amygdala is capable of a markedly organic, interactive and changing behaviour which recalls the movements of animals.

Calyx is the set of skins that, after their interaction with the prosthetic robot in different presentations of the work, show traces and scars that testify to the computational agency of the machine as well as to its oblivious brutality. The skins are the result of the combined activity of the human artist and the autonomous robot, an organic relic of a techno-emotional ritual. 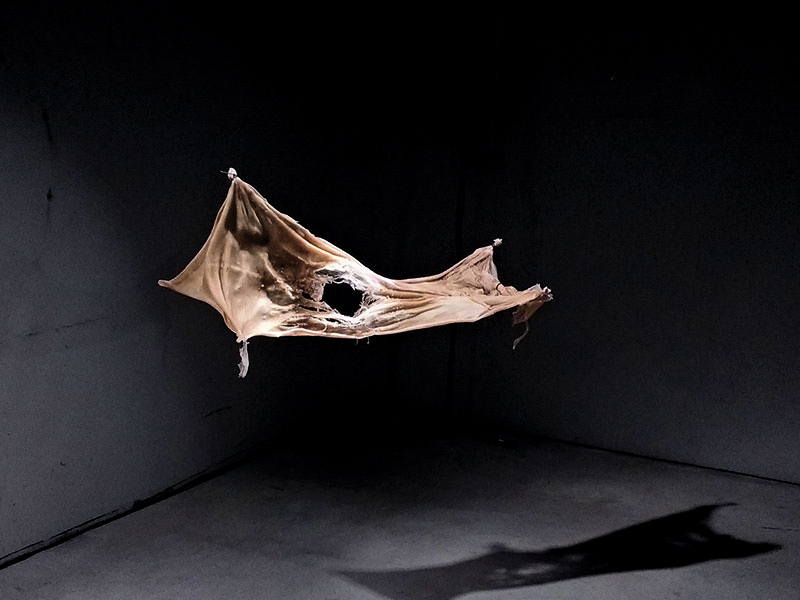